Ensuring the Vienna of tomorrow 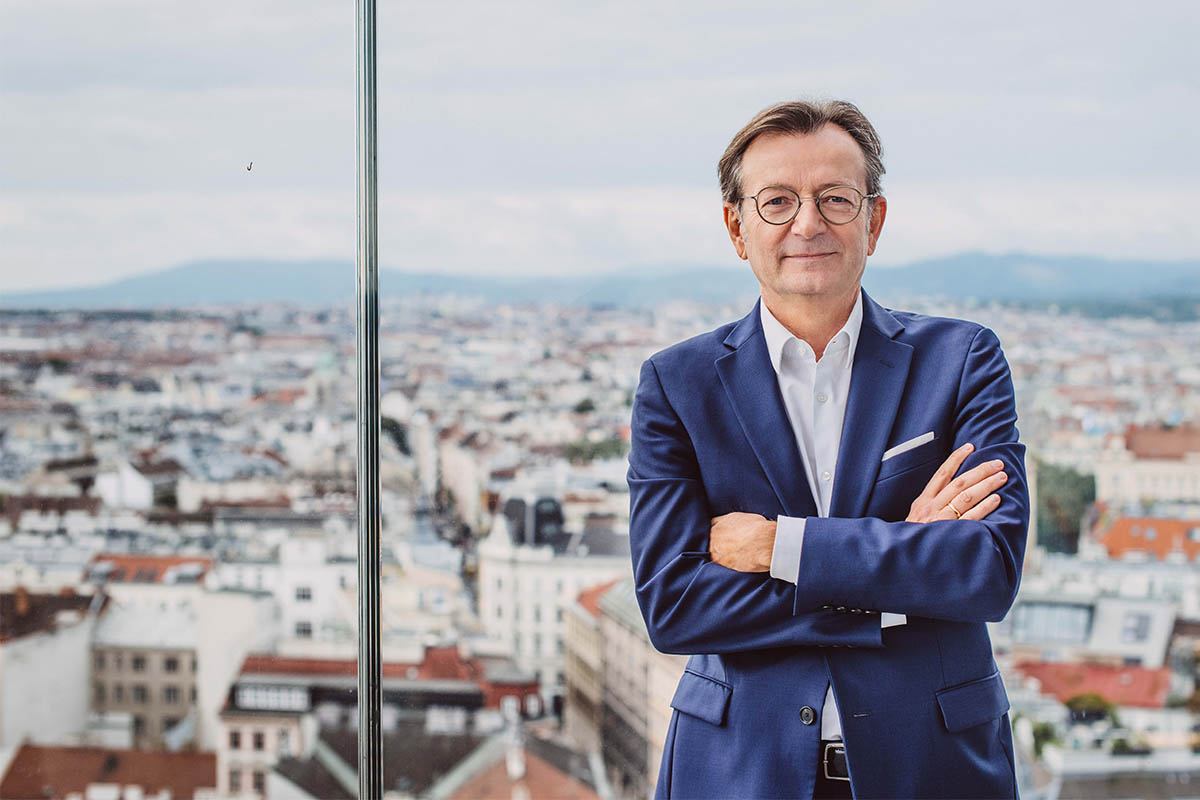 04 Jul Ensuring the Vienna of tomorrow

Gerhard Hirczi, Managing Director, Vienna Business Agency, has a vision that Vienna will become a multi-cultural, industrial and green powerhouse at the center of Europe.

Would you tell our readers why Austria is such an attractive place to do business? What are its key strengths, and how has the government worked to support the development of its large and upcoming sectors?

Many people underestimate Vienna. It is, in fact, a competitive business location which is confirmed in our GDP of almost $110 billion. This is quite an amazing number: It is roughly the same as our neighboring countries, Slovenia and Croatia, combined. Including our very small and micro companies, there are roughly 160,000 companies doing business in Vienna and 9,000 new businesses founded every year, which shows that there is vibrant development happening.

Our areas of excellence lie in ICT, which has an annual turnover of roughly $26 billion, four times the revenues coming from tourism. Our second area of excellence has become life sciences. We are among the top five life science locations in Europe, with annual revenues of about $15.5 billion. The third area of excellence, which seems to many people to be highly surprising, is production. Not in the sense of smoking chimneys, but smart production, IoT, or industry 4.0. Our annual turnover from this industry is almost $33.3 billion and accounts for nearly one-third of the whole GDP of Vienna.

Another characteristic I would highlight is that our economic growth is due largely to our knowledge base which stems from our many universities. We have 26 private, public, and applied sciences universities. Almost 200,000 students are enrolled in Vienna, 30 percent from abroad. There are a vast number of researchers in the city with almost 60,000 people working in R&D here, which ranks Vienna as number three in Europe.

Can you give us an overview of key milestones Vienna Business Agency has passed and the organization’s current strategy to support the development of local industry?

Our vision is to strengthen the businesses here, regardless of whether they are local or international. Our aim is to make them better, stronger, more competitive and more innovative. We safeguard that through a number of different instruments that I can group under three different umbrellas or pillars. The most traditional one is funding. Every year roughly $44 million is spent on direct, non-refundable financing for innovative projects of companies who are doing business in Vienna. In our portfolio, we have funding instruments ranging from lower levels supporting local businesses, to programs aimed at R&D activities of companies that require a very high amount of innovative content.

Our second pillar is the real estate business. We offer plots of land and office space for companies who come to Vienna or relocate here. For the past two decades, we have been active in real estate development, and we are one of the key players in the city in urban development areas. For instance, we are very active in Lakeside Aspern, the biggest urban development project in Europe. Ten years ago, we constructed the first building. No other developer would have done that in the middle of nowhere. The economic risk was enormously big. Only organizations like ours can afford to do these types of things because it is our mission. Every time we see some kind of a market failure, we are the ones who go there and invest to try to show those that will follow that it can work.

The third pillar is a broad range of different services we offer to companies in Vienna. We have departments that specialize in specific areas such as startup businesses, technology companies and creative industries. We are the organization responsible for the attraction of international companies interested in coming to Vienna. Something that has become especially important within the last five years within our product portfolio is internationalization and the growth of startups.

What opportunities has digitalization opened up for Austria’s key sectors, and what kind of support is the digital revolution receiving from the state? What are Austria’s current shining stars in digital tech?

Vienna implemented the first smart city strategy in 2014 or 2015, and digitalization was a cornerstone of the strategy. Alongside that, there are two other very important aspects integrated into our smart city strategy: sustainability and social inclusion. This makes Vienna’s digitalization strategy a bit different from the digitalization strategies of other cities that are primarily oriented toward technological brilliance. Rather, our ambition is to become an efficient and competitive city and at the same time, giving citizens a good life. Digitalization is not, I would say, an end in and of itself, but it is a means. It has to support our activities to maintain the quality of living in the city of Vienna.

One of our big challenges is to bring the Viennese economy into the digital age. Especially important to us is that we do not decouple the highflyers and the local economy, because we believe it is crucial to digitalize the economy as a whole. A number of SMEs fortunately, have become hidden champions. One of our favorite role models is TTTech, for instance, which is a perfect example of what a company can become in just 15 years. They started out as a spinoff of the Technical University of Vienna. They then became a startup, then a small enterprise, then an SME, and now it is a full-fledged unicorn. That is truly amazing, and of course, we would love to see hundreds and thousands of developments like that, though  we know that is not possible. There will never be a metropolis full of unicorns, which is why you have to take care of the entire business community and make it as digital as possible.

What kind of impact have ESG investments had on Vienna’s economy and industrial ecosystem? What kind of support are developments in this area receiving from the public sector?

It is no big surprise that sustainability and ESG have become a top political issue in Vienna and in our agency. You may know that the new city government of Vienna has committed to making Vienna climate neutral by 2040 through a vast number of projects and activities; mainly, of course, by replacing fossil fuels with renewables.

We at Vienna Business Agency are supporting that goal through our various resources. We are just about to launch a new round of funding of $3.33 million called Zero Emissions Cities. Within this program, we are looking for projects that help to solve the global crisis with the best possible solutions for these challenges. The maximum funding per project is $555,000, which is quite a lot. Uniquely, it is not only destined for local companies, but also for international companies, which is something new in Europe and in the world today. Our ambition with that call is to attract international companies to do their R&D here and to test their solutions with our players in Vienna.

What international markets currently represent the most investment into Austria, and how have international entities supported the development of Vienna’s industry?

Vienna has strongly benefited from its proximity to Central and Eastern European countries, and since the early 2000s, many Western European, U.S. and Japanese companies have come to Vienna to set up their businesses and then expand into Eastern Europe. Essentially, the city has been a bridge from the West to the East. In addition to that, since the expansion of the European Union began, many countries from the east make Vienna their first stop on their way to other European countries, which makes us a hub. Vienna offers a perfect balance between the eastern and western parts of the continent. Accessibility to Western as well as to Eastern European markets is extremely easy and makes the city highly attractive, something reflected in FDI. Currently, roughly one-third of all direct investment comes from Germany and Switzerland, followed by the Central and Eastern European countries, and then by the United States and United Kingdom.

What are your personal goals as managing director of the Vienna Business Agency and what needs to be done to achieve them? What are your expectations for Vienna’s industrial ecosystem in the next five to ten years?

Our ambition is to remain a strong partner for Viennese and international businesses here. One of our current aspirations is to adapt our organization and our instruments even more in the direction of sustainability as this is an all-decisive matter. A personal goal is to establish Vienna as a leading startup city within Europe. We are extremely proud of what has happened in Vienna because we have come a bit from behind to make a name for ourselves among the startup cities of Europe. A study just came out conducted by a company called I5invest which had a look into Europe’s recent unicorns. In 2021, Europe became home to 85 new unicorns. Six of them come from Austria and four of those are from Vienna. This makes Austria number five in the ranking behind the U.K., Germany, France, and Sweden—and Vienna number seven! I have to say that we are extremely delighted about that. If you would ask the Viennese people about this startup performance, they would be astonished, and this is one of the characteristics of the Austrian spirit.

My expectation for the Viennese industry is aligned with your report’s motif: green, clean and smart. Five to ten years from now, I see us having a digitalized, sustainable, efficient, but still human-centered economy. I see Vienna as a role model for a perfect combination between efficient industry and quality of life.