Ireland’s journey to being the benchmark for technological change 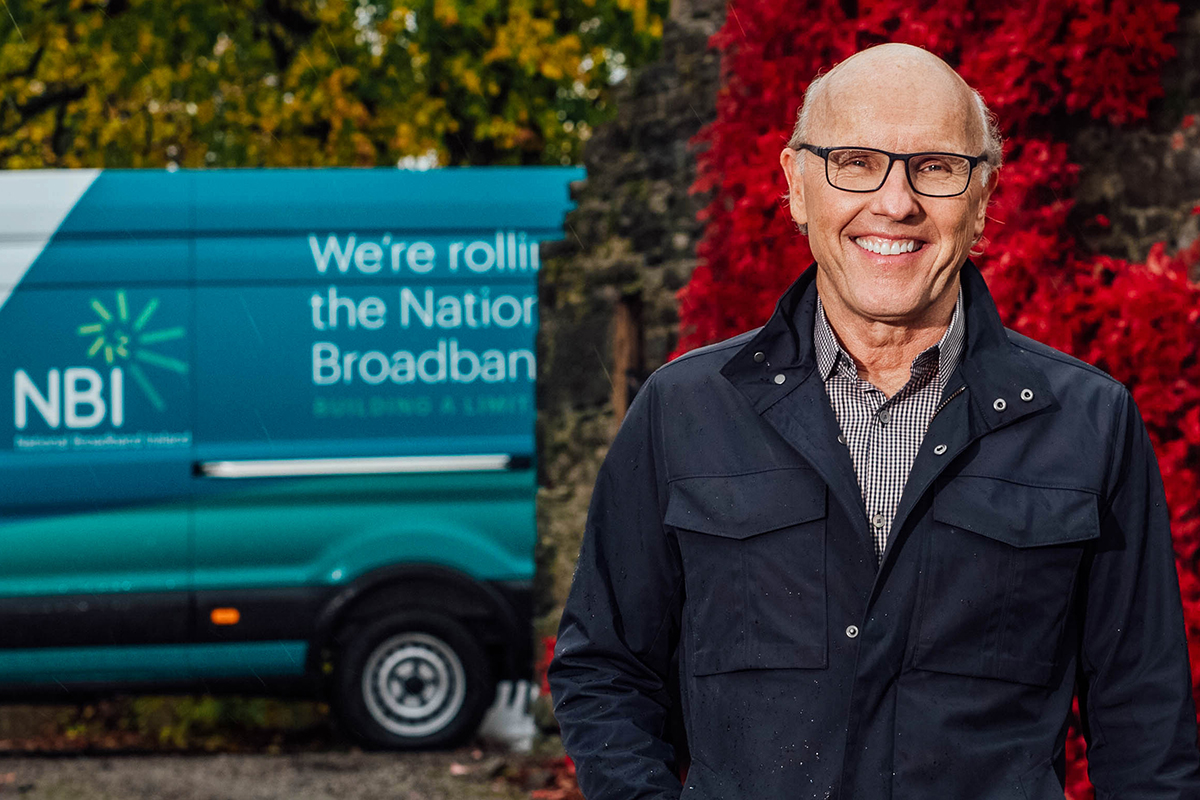 David McCourt, Chairman, National Broadband Ireland, discusses Ireland’s ambitious plan to connect the entire country to broadband and the relevancy of technology in pushing for a better world of tomorrow

What is the significance of the government’s $3.7-billion National Broadband Plan (NBP)?

The National Broadband Plan project aims to give 100 percent of the population access to high-speed broadband. Ireland was the first country in Europe to mandate such a move. It will allow people to lead a prosperous life in a rural environment with equal access and equal opportunity. Businesses will be able to access a minimum of 500 megabytes per second (MBps), which is a world-leading speed. It is an example of a heritage of ambitious government policies and punching above the nations’ weight class. The plan is the deal of the century because of its size and scale. Ireland is a very rural country. If Ireland had the population density of the U,K., we would have 38 million people, but we only have 5 million–It is very spread out. To wire upwards of 600,000 premises, we must use enough cable to go around the circumference of the earth four times. It is the biggest and most ambitious public private partnership in the telecoms sector in Ireland–and perhaps in the world. It sets Ireland on the path to becoming a global leader in connectivity, which opens doors to becoming a leader in innovation and collaboration. Access to connectivity will also inspire advances in healthcare, education and agriculture. NBP will pave the way for not only Ireland but other nations as a successful blueprint.

As the world moves towards a tech economy, connectivity to every man, woman and child is imperative. Across almost all developed countries, we see a digital divide whereby urban areas have an advantage through their access to connectivity and digital services while many rural areas struggle. Urban areas around the world are growing by three million people a week; that means every three weeks we are creating another Hong Kong, London or New York. This is unsustainable in terms of environment, cost of housing and congestion. Additionally, we cannot assume that the only smart people in the world are men and women who live in urban centers. In the U.S., around 80 percent of top graduates from top business schools all go to the same six cities. This creates an economic divide. The only way to turn this around is to get people employed where they live without having to commute; we must be in a position where people in rural environments can start or grow a business from wherever they are. The COVID-19 pandemic has shown us that this is possible.

Technology and the internet have brought astronomic change since the mid-1970s. Almost every business in the world is reliant on the web. Purchasing power has improved a million times over in any way you measure it; what cost a million dollars to buy in the mid-1970s now costs a dollar. We need to be ready for Internet 3.0 when machines begin communicating with other machines in real time. We will see further transformation in how people work, how they are educated, how they care for themselves and how they care for their family–and all this starts with broadband.

Alternatively, 5G is an important piece of technology. The rollout of 5G in urban environments will come very quickly in Ireland. However, it be a long time before it reaches rural environments because it is expensive. 5G is hugely important globally and will synergize with fiber networks.

How is the plan progressing given the untimely COVID-19 pandemic and other challenges that presented themselves in 2020?

We are working in all 26 counties across the Republic of Ireland. We have over 150,000 premises that have detailed designs. We are physically constructing around 75,000 premises as of today. We put close to 300 broadband connection points around the country that provide free public access. There are almost 1,000 people working on the project. We recruited the best and brightest minds from around the world. We have 39 retail service providers that have signed up to resell our service. In January 20201, we celebrated the first homes getting connected to the network, a testament to the tremendous progress we made during the pandemic.

NBP started off as a 10-year project, but we lowered it to seven years when we signed the contract in late 2019. We will do everything we can to bring this down further. We must make up time we lost during the COVID-19 pandemic and Brexit. These two elements made it difficult for us because we were going to use some specialist contractors from the U.K. that paused their Irish operations. Another challenge was the battle between the U.S. and Huawei. This put pressure on our vendors even though we were never going to use Huawei. We received a tremendous amount of inbound phone calls from huge global telecom operators such as BT Group, Orange and Telefónica that were looking at alternatives. This put pressure on our supply chain, but we overcame it. We have navigated these challenges and believe we will still beat our deadline.

What will National Broadband Ireland’s role be once development of the NBP is finished?

We are responsible for maintaining the network and continuing to offer benchmarked speed and services for the lifetime of the network. We will need to invest to keep speeds up to compete with the urban market. When we started our bid for this project, the government wanted us to build a 30-MBps network. By the time we got the contract, we committed to a 150-MBps network, and less than a year later we moved to 500 MBps. Speeds will continue to rise beyond the 500-MBps benchmark, which will require more investment. We have our work cut out for us now and in the future.

What does Ireland need to do to remain competitive on the world stage and foster growth?

Ireland is doing well in the development of data centers. Every major tech company on the planet has offices in our major cities, such as Microsoft, Facebook, Google and Amazon. The question is if we can keep this going. Big tech companies are realizing they can hire people globally and no longer require monolithic office structures. Will Ireland continue to be the place where these tech companies recruit? The three following factors are critical for Ireland to compete on the global stage: Ireland must put in place tools to make sure tech companies recruit people from Ireland; we must help home-grown businesses expand and grow into medium-sized or large businesses; and we need to help young entrepreneurs start businesses in rural areas.

Ireland grew in 2020 despite the unprecedented situation the world found itself in while other nations faltered. Ireland will come out stronger from this crisis and Brexit. The country understands the importance of climate action, infrastructure development, smart tax policies and the emphasis on higher education. It was early in recruiting global businesses to its shores and other smaller things such as banning smoking in pubs, introducing drunk driving rules and giving everyone broadband access. The nation has been a leader in tax and education reform, and they now have the chance to be a leader in healthcare, job and other reforms. Ireland has shown foresight in looking to the future and will be the gold standard to which the rest of the world looks at.

What major problems does our generation face in terms of the technological revolution?

There are two unintended consequences of the internet. One is that the Internet was supposed to be decentralized and it is not. Data is currently centralized in a handful of companies such as Amazon, Facebook, Google and Microsoft. We need data portability where people own their own data. The other thing the internet was supposed to do is make all facts known to us so we can make better decisions. The spreading of non-facts is an unintended consequence that needs to be fixed. These two elements need to be solved for Internet 2.0. Additionally, rules around Internet 3.0 need to be developed quickly such as digital object architecture and data portability. These big issues need to get dealt with globally. If the West gets tied up in regulating the past instead of looking forward, we are going to have a problem.

The divide between the haves and have nots around the world has widened to a breaking point. One of the necessary arrows in our quiver to solve that problem is to give people equal access to technology. This will be the foundation for giving them equal access to jobs, education and healthcare. These three elements are cutting the heart out of the middle class all over the world. Prices for housing, education and healthcare have skyrocketed. Technology can solve housing costs by allowing people to move from urban centers. It can also fix education costs. The days of paying tens or hundreds of thousands of dollars to go to a university are behind us. After seeing students take an entire year of university on Zoom, people are going to begin wondering why they are spending this kind of money to physically send learners to a physical university. The paradigm will have to be rethought. Technology is also doing its part in transforming healthcare. Technology is the foundation for necessary changes in the future.

What are the biggest lessons you have learned personally through your work with National Broadband Ireland?

One of the lessons I learned is that it always takes longer to get to the starting line with complicated projects. When we began, we thought that it would take 12 months with a $1.2-million bidding budget. It ended up taking us three years to get the 7,000-page contract with a massively multiplied bidding budget. Public private partnerships take a long time and are more complicated than you expect. You must operationalize a very complicated contract. The only way to do this is to have a good relationship with your counterpart based on trust, mutual goals and objectives. My goal is to transform rural Ireland, and the government shares this goal. I have spent my career at the intersection of policy, business and community. This triangle is an interesting place to be–but also complicated.

I have worked on 24 major network builds across North America, South America and Europe and each one is unique. Each ultimately comes down to relationships with local planning departments and stakeholders and making sure you deliver what they need. Everyone shares the same objective of being meaningfully employed with a dignified job that pays the bills for one’s family. If you want to be able to do that, you better have technology in your house. Old jobs are going away, and new jobs are coming imminently, yet the education and training sector is moving slowly. The foundation to fix this problem is technology.